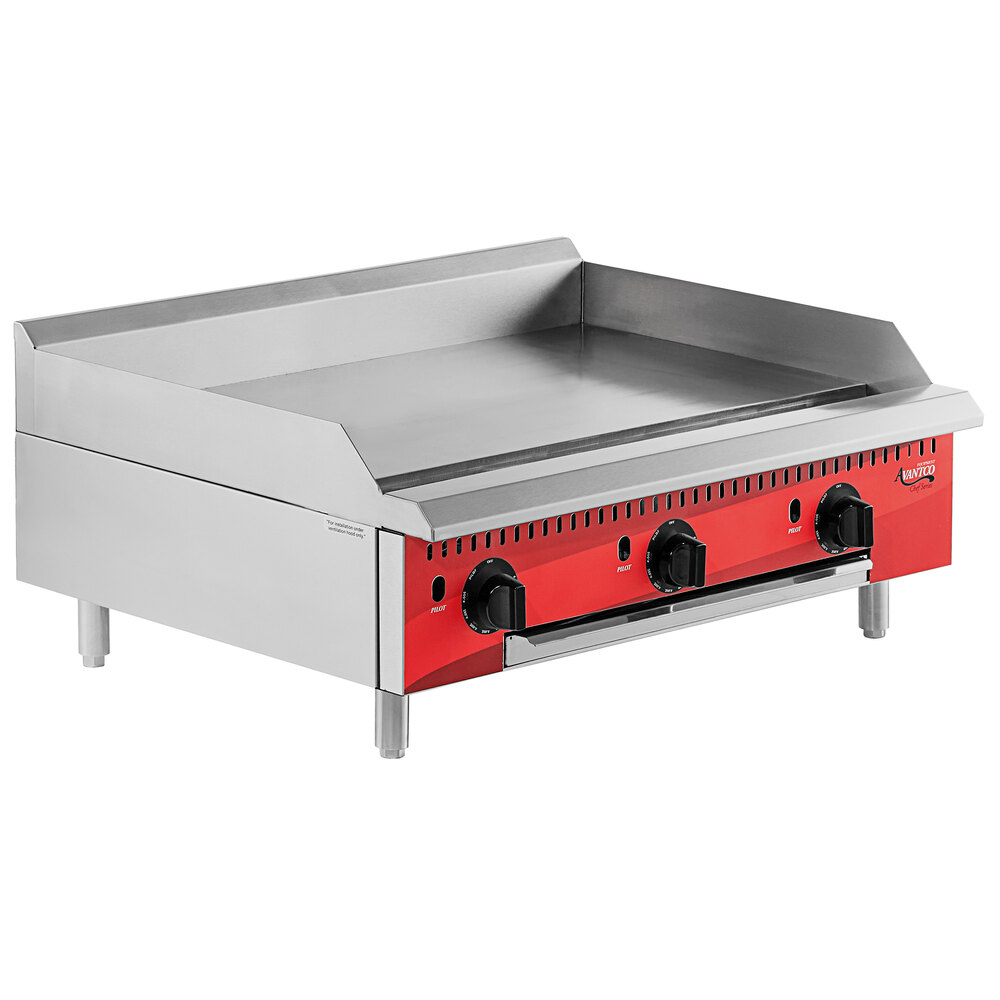 Perfect for busy operations that are tight on space, this Avantco Chef Series CAG36TG 36" countertop gas griddle with thermostatic controls adds easy compact convenience to your kitchen! The unit is space efficient, designed specifically for your kitchen countertop and allows you to maximize every inch of work space. With (3) 35,000 BTU burners, it is ideal for cooking burgers, pancakes, or vegetable skewers, as each burner can be set to a different temperature. For quality performance, the griddle surface is 3/4" thick, ensuring quick recovery and convenient heat retention, saving you money and keeping your kitchen cool.

With a countertop design, the unit is space efficient, leaving room in your kitchen for additional equipment, supplies, or work surface area. It also allows placement on top of existing work tables and chef bases, ensuring that your space is maximized to its full potential. For quick and easy cleaning, this unit features a waste tray to collect food particles. Simply remove the tray, empty or rinse it, and return it back to its original spot.

Operation is simple and intuitive, thanks to the 3 large control knobs located on the front of the unit. These controls operate the burners independently, so you can set each burner on the griddle to a different temperature and cook different items at the same time. This griddle features thermostatic controls which your cooks are sure to appreciate in a busy kitchen. Instead of constantly monitoring the temperature, like with manual controls, simply set the griddle to your desired temperature and it will maintain that temperature within a few degrees! Unlike other gas griddles that require liquid propane or natural gas, this unit ships ready for a natural gas connection, but can be converted to accept liquid propane. The unit uses a total 105,000 BTU for operation.

Incredibly ... Alright We purchased this griddle to replace a 15 year old starmax that had bitten the dust, and admittedly this is a step down even from the old grill. It does boast big power- 105,000 btu's actually, and that's a good thing because the thin 3/4" top plate has trouble keeping temp when busy. The burner power does -almost- make up for it's poor heat retention as it bounces back very quickly. Quickly enough for low to medium duty applications. Here's the bad... The drain pan is wide and shallow, making for a difficult empty without spilling at the end of a shift. Furthermore, instead of a track for the drain pan to slide into, it's an enclosed opening, meaning if anything falls through or is stuck in the chute, you have to scoop it out or get it shoved between the drain pan and back of the unit- leaving the pan sticking out. THE WORST part is the poor pilot system and thermocouple "locks". This thing is a NIGHTMARE to light, and I have to spend 20 minutes every day lighting it. The pilots stay lit, but as soon as I turn the knob on, the burner lights, taking the gas away from the pilot. Then the pilot goes out, i hear the thermocouple "click over" and it cuts the gas off and goes out. I have to sit there and hold down the knob until the thing heats up enough to keep the pilot on and start it at low temp (200°) for 15 mins before cranking up the heat. Unfortunately this is like a bull in a china shop. Plenty of power but lacks the refinement to really work as intended. I gave it 3 stars because once it's lit it does the job almost adequately for my high volume operation. Make no mistake though, once a vollrath or starmax is back in stock, I'll be retiring this griddle early, and relegating it to "backup" duty.